A peak behind the scenes of leading CGI and game studios

Vertex 2018 at Olympia a few weeks ago wasn’t an entirely typical event for King’s Digital Lab to be attending. It’s a commercial event, bringing together an array of big names in the fields of 3D art, games and the CGI industry with an eager audience looking for guidance, practical workshops and career advice on how to enter this hugely competitive industry. The number of universities exhibiting their courses made it clear that there was a large appetite for formal training.

So what was the reason for our presence? KDL has made no secret of our intention to broaden the scope of our projects that make use of immersive technologies, a term I’m using as a catch-all for Virtual Reality, Augmented Reality, various 3D visualisations and all the ancillary skills that support those mediums: 3D modelling;  game engines; 360 degree environments; procedural world building … the list goes on. In visiting this event, I hoped to get a sense of the depth of the skill pool sitting out there and how personal creative interests might align with our research interests. Also, I wanted to develop a better understanding of the competing and complementary technologies available and, in particular, what attitudes were to open-source alternatives to big mainstream proprietary software.

If I had a preconception about the type of crowd, it was perhaps that they would fall into a similar demographic grouping to my own; middle aged, male and prone to the common distractions of the self-identifying nerd e.g. classic science fiction tv, fantasy novels, comics and free roaming computer game worlds. I was happy to find myself wrong on that front and pleased to find a mix of a young aspiring artists and seasoned industry professionals -  sometimes even young seasoned professionals. There was also a healthy degree of gender diversity as far as I could tell. It still tipped slightly in favour of the male attendees but not by very much. It was a shame though that only one of the keynote speakers I saw was female.

Considering that the sort of technology that enables this creativity is only now becoming ubiquitous, one might be forgiven for assuming that this was a young(ish) industry feeling its way through a new(ish) medium and establishing wildly variable standards on the fly. This misses the mark. Some of the luminaries from the CGI world have lengthy experience of delivering convincing 3D content and countering the challenges that that goal has presented under evolving technical restrictions. They understand their audiences well and they understand the technology from the ground up, having been instrumental in the formative years of CGI. This level of understanding might become harder to find as the technology continues to become easier and more intuitive to use, thus demanding less specialised knowledge on the part of new users. The old guard also have a reassuringly academic and philosophical approach to the work they do, regarding its ethics and the empirical research underpinning human relationships with digital representations of themselves.

The most notable example of this mindset for me was the opening speaker Chris Nichols, who gave an engaging talk both about the challenges of creating a digital human and the potentials for misuse that we are struggling to navigate in the era of fake news. Questions about whether it’s right to digitally bring back an actor from the dead to complete a movie seem less pressing when AIs are demonstrating the ability effectively to create puppeted footage of our politicians. So called Deep Fake technology is putting this ability into the hands of the masses when it was once the preserve of multi-million dollar budget movies.

The natural concerns that surface as we digest the possibilities here are relevant to cultural heritage research as well. KDL might not often have occasion to create photorealistic human avatars, but we do anticipate creating convincing and immersive experiences that make it clear where the lines are between conjecture and cold hard fact. My old colleagues at King’s Visualisation Lab understood this very well and the London Charter was conceived precisely to address approaches to visualisation that did not mislead or imply certainty where there were multiple interpretations possible.

Nichols co-founded the Digital Human League, which currently has a project to create a reusable set of standards for the high quality rendering of digital people in an open source approach. You can download Digital Emily from their WikiHuman project. Physically Based Rendering (PBR), when properly applied, gives some incredible results. The team behind Digital Emily have created a set of guidelines for creating skin textures with blends of diffuse and light, and used displacement and bump maps to add detail and complexity without an overly complex mesh. The technical approaches to rendering aren’t in themselves anything new but the standardisation of approaches to capturing and processing to avoid duplication of efforts are incredibly valuable. They are setting  new benchmarks in quality and providing a roadmap for life-like human rendering. I can see myself creating a digital me one day, when costs, time and technology allow. 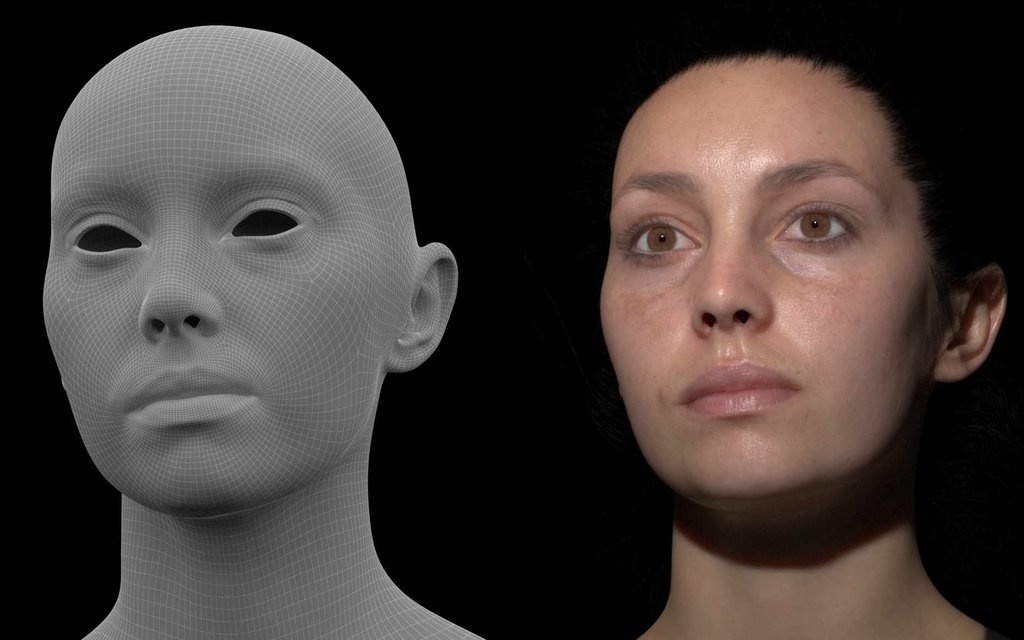 Bridging the uncanny valley seems to be a little way off yet though in animated avatars, due in part to the difficulty in understanding our innate sense of others. There are micro-cues in our perception of other living beings that we aren’t fully aware of ourselves. Extremely close inspection of a stationary human will reveal minute fluctuations in skin tone that reflect the pulse. Eyes are not in the least bit regularly shaped but are in fact rather lumpy, to accommodate the nose! Even convincing eyes tend to flick about quickly and meet the eyes of an interrogator. It’s not just about static photorealism but the micro-gestures and upper body animation that really add to the illusion of reality and rendering these sorts of details in realtime is still next to impossible unless a lot of the necessary material and texture assets are extensively pre-baked. The same team are already at work on Digital Mike and are continuing to refine their processes.

Games developers and movie compositors work in huge teams and with apparently unlimited resources, in contrast to many of our projects at KDL. I wondered if there was anything to be learnt about workflow and processes, given the complexity and massive scale of some of the projects on show. One of the most well attended workshop sessions (standing room only when I arrived) was given by Danny Sweeney, who worked on character development for the Total Warhammer game series. Whilst much of the crowd were more interested in hearing about sculpting techniques, Sweeney principally ran an engaging session about the work pipelines at Creative Assembly. In much the same way as KDL might create a modular research tool, Creative Assembly used version control and repurposed 3D components in a Lean production pipeline that minimised repetition and duplication of effort. It was interesting to hear that even in this large commercial endeavour, team members were often called upon to be generalists. In this domain, that meant that artists often needed to be very technically minded. Likewise, in KDL, although we have specialist Designers, Analysts and Developers it is very healthy to have a good understanding of the tools and processes of all the roles and even better to be able to step from one role to another occasionally.

Many of the workshops were given by digital artists, working in various fields such as animation, concept art, creation of procedural materials, environments and world building. Across these fields it would be hard to say that one set of software tools emerged as an industry standard. Surprisingly, very few mentioned Blender as a serious 3D tool, occasionally citing its notoriously arcane interface as a barrier to uptake. The interoperability of 3D file formats, particularly the Wavefront Object format, would suggest though that there will remain multiple niches for 3D modelling programs to occupy, depending largely on personal preference.

All in all, this enjoyable and informative day convinced me that KDL are adopting the right, open-minded, open-source approach to improving capability for 3D workflows in our new research projects. Barely a week goes past now when we don’t have an enquiry about VR, AR or 360 degree imagery, and I feel more confident and excited with each new proposal that we can use our established SDLC processes to engage with these new, and frankly rather cool, challenges.