Conferences and gatherings while working from home

In these strange days technologies for virtual meetings and gatherings that have been developing steadily and quietly are now finding themselves suddenly ushered to the front of the class as we ask what might change in the workplace post COVID-19.

These questions were posed in a conference yesterday and explored through the very medium being asked to step up to plug the gap; namely VR. The event was jointly organised by Immerse UK and Vive and generously hosted on Engage VR’s  learning and conference platform.

As a paid up evangelist for VR as a transformative technology I’m often a little bemused by the still commonly held reservations about the tech which often seem to be based on discomfort during fleeting experiences with the first generations of hardware. The state-of-the-art has been moving at breakneck speeds and many of the old quibbles about low resolution, motion sickness and underwhelming experiences no longer apply. Furthermore, the refinements needed for these platforms to become good proxies for in-the-flesh meetings require a certain amount of constructive engagement to help turn them into the generation of VR tools we now need to protect both our environment and our health.

I attended a conference in VR for the first time yesterday, very much in the spirit of exploration, accepting that there would be limitations, inconveniences and glitches, but open to seeing the more subtle merits of meeting in VR.

Being the first conference that I have attended on such a platform I don’t mind admitting that I was as excited by the format as much as I was by the content and the speakers. A train of thought recap seems as appropriate a way as any to describe the experience!

Inevitably I spent slightly too long before the event perfecting my avatar with the well-intentioned advice of my partner who suggested that my hair should be “greyer than that” and that my face “should be chunkier”. I made a reasonable effort to faithfully reproduce my earthly appearance by uploading my mugshot which was then draped over a generic 3D male head shape. Something was inevitably lost from my roguish good looks but I reasoned that this was only of marginal importance. I also made sure that in VR I was wearing my trademark jeans and T-shirt ensemble. Then I was ready, with a degree of trepidation, to enter the conference lobby space.

Much like a real-space event, I experienced the visceral anticipation of meeting strangers, accompanied by a slight sense of uncertainty regarding the proper form and mechanics of interaction with other avatars. With my microphone off, I lurked around the edges of the room looking at displays and eyeing the crowd from a safe distance (so far so normal) . The hum of conversations, spatially rendered, is a compelling aspect of the immersion. This lobby areas was the holding-pen, and the conference proper would actually take place in three identical virtual venues (each space hosting fifty attendees). While we waited for the main event, I played with a glockenspiel and sank a few baskets.

Once in the Engage VR environment I am equipped (virtually) with a better tablet than I actually own in the real world on which I can make notes, look at presentation slides close-up and best of all, take ill-judged selfies:

The conference’s chosen environment was pleasing enough; an open-air amphitheatre under a blue sky, by the sea, but the trouble I’d taken over my virtual appearance seemed poorly spent as I looked around at my co-attendees. I realised that as I’d joined the event using the Oculus Quest version of the Engage app, I was provided with a slightly less rich version of the environment; participants were represented by only torsos and hands and the photorealistic avatars were absent. This wasn’t necessarily an issue but once I realised, I opted instead to dive headlong into the uncanny valley and I re-joined the event using the SteamVR implementation which provides a much more detailed rendering: 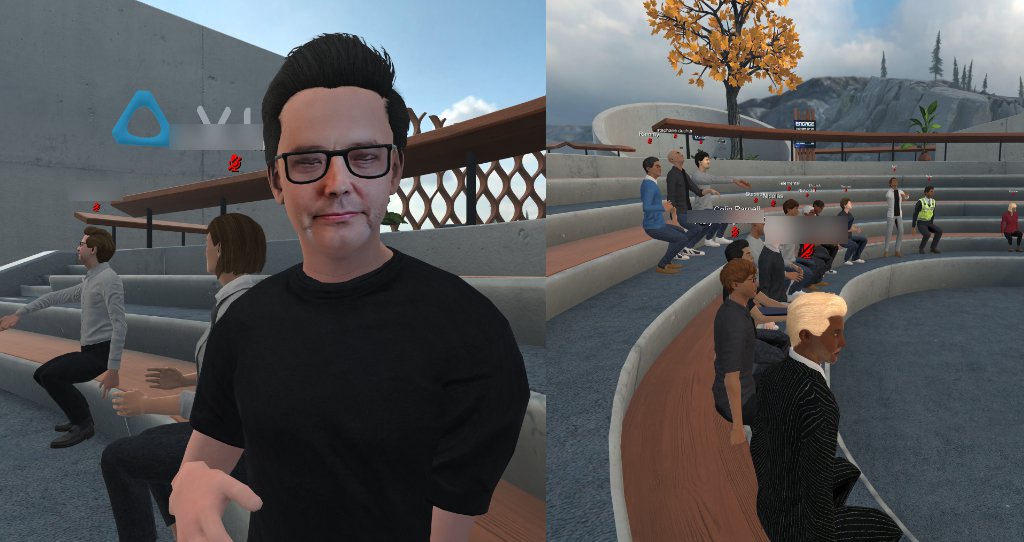 An initial problem, (with the medium rather than the platform) is that the novelty of the environment overshadowed the event itself. I found I was preoccupied looking around at other participants, trying to recognise names and observing their behaviour. Many of the attendees had adopted bizarre and athletically challenging postures. It took me a few moments to realise why: if you put down your VR hand controls your virtual hands might suddenly manifest by your feet. If you take off your headset to rub your eyes or visit the loo, your avatar might be left in the virtual world with your neck angled up at the sky as if expecting an alien invasion. If you have been automatically ‘seated and muted’ by the event administrator in VR and then actually sit down in the physical world, you may find that your virtual head is resting disembodied on your virtual chair. I ended up taking a lot of photos of these odd VR yoga poses: 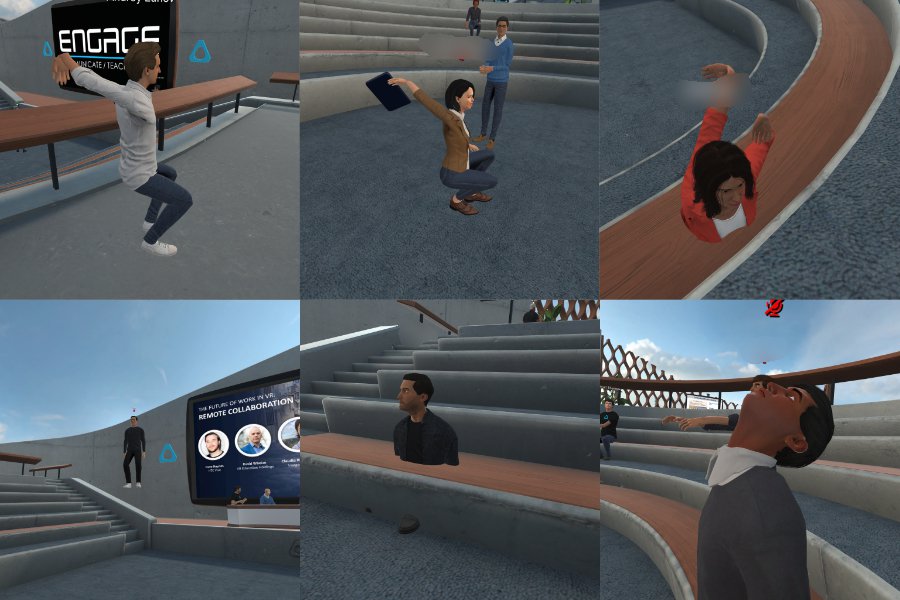 VR Yoga. Be careful how you leave your headset and where you put your controllers!

To the substance of the event then. The presenters introduced their product solutions for meeting, learning and collaborating (https://sync.vive.com/, https://dimension10.com/, and https://www.imagedreality.com/) each was able to perambulate convincingly around a stage referencing a large projected presentation (impressive projects all though I’ll leave you to follow the links). This was followed by a panel session.

All the while I was comparing this experience to how I might be acting in a real conference. Firstly, I would be Tweeting and I couldn’t find a way to do this from within the virtual. I would also be note taking, though the act of typing in VR is currently slightly cumbersome. I found that I would have liked to have been able to scrawl on my virtual tablet instead. I would of course be taking pictures of slides, and it was a nice touch to be able to see the live presentations on my virtual tablet. There were a couple of technical glitches which might have been my end so I won’t dwell on them.

As the panel session drew to a close I was looking forward to networking, though with a childlike curiosity rather than any expectation of making meaningful exchanges. This was definitely the most intriguing aspect of the medium for me.

I remember my first video conference experiences and how confrontational it had seemed to be looking directly at someone as they spoke. In real-life conversations we rarely stare so intently at the other party, but the medium seemed to require it. Of course we all got over whatever our personal reservations were and now generally find video conferencing to be a valuable tool. We can see a person’s expression and get a sense of their feelings and body language. In VR the body language is there to see, it can be emphatic and exaggerated, but the expression of the avatar never changes. I felt there was almost a need for an intuitive emoji-type interface to quickly and naturally see the mood of your conversational partners.

The spatial audio came into its own at this point too. It was simple enough to move to a quiet corner to concentrate fully on a conversation, but I wondered how one might have a truly private conversation without leaving the VR environment. If someone were so motivated, they could quite easily sneak their avatar behind a digital palm tree to eavesdrop! However, I made a couple of connections that I’ve followed up on LinkedIn or social media, but there was no obvious way to swap business cards.

Much of this reflection might sound overly negative though I’m simply making observations about a new paradigm of interaction. Overall I was impressed to the extent that I’d very much like to see how KDL could use the same tech to augment our virtual and dispersed Lab whilst under lockdown. However, a key obstacle is the availability of the equipment needed. I’d love to try this medium with friends and family too, but I feel like the first man on Earth with a phone; who can I call? The irony is that the equipment will be far more available when lockdown finishes.

The annual DH event (now cancelled) brings together thousands of practitioners from across the globe and sustainability is an increasingly hot topic, not just around research and software but from the more traditional environmental perspective. With careful planning I can see how portions of this event could be moved into this sort of communal VR space. For every limitation there are amazing potential affordances; share a 3D model with your audience? No problem. Can’t get a wheelchair up the stairs? No worries.

This was a toe dipped into a new world for me. There are other VR meeting platforms; some of them business focused, some educational and some purely social. Facebook Horizon is due to be released this year and I imagine that the social network giant will take quite a swipe at the B2B market. I do hope that the pioneers don’t get swept aside when this happens…

I could ramble on as there is a lot to think about, but instead I’ll leave you with a group selfie complete with photobombing by the Vive and Engage team! 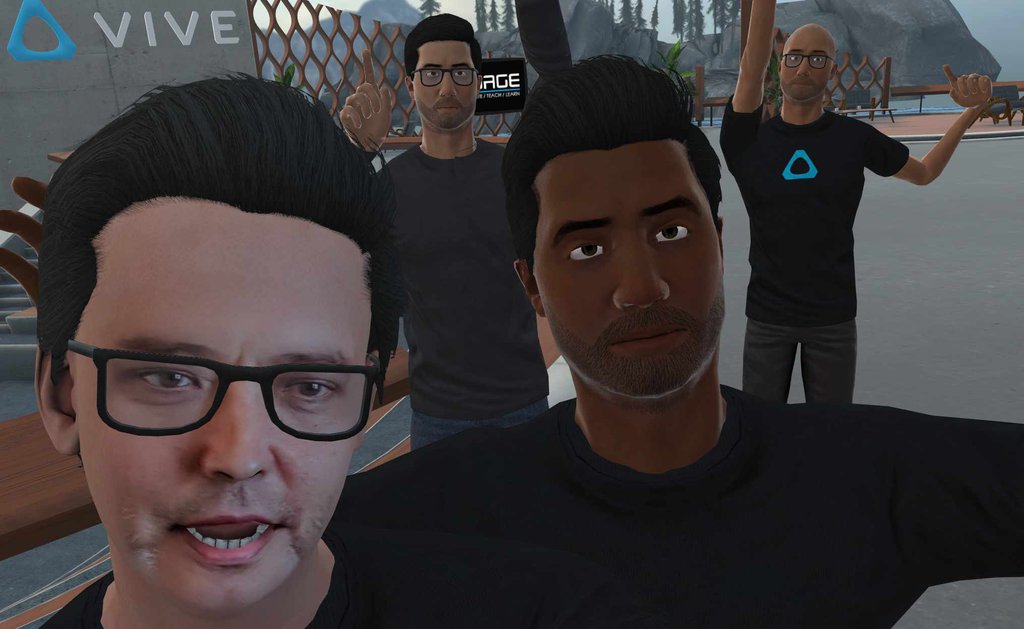